Where did they come from anyway?

Born in September 1957, the icon of the American landscaping, the pink plastic flamingo, is over 50 years old! But where did it come from anyway?

Would you believe a very serious sculptor and classical art student who needed a job? Although you might believe the plastic flamingo was a figment of the unemployed mind, quite the opposite is true; it was actually a New England plastics company's idea! (stuffy New England? Yes, New England.) And it didn't involve alcohol!

When we met Don Featherstone, flamingo designer, he told us that after graduating from Worcester Art Museum's art school, he had limited job offers. He was offered a job with Union Products to sculpt three-dimensional versions of the company's most popular two-dimensional products: the duck and the flamingo. He said his choices were: starving artist or plastics company. Facing hunger, he went with the plastics company.

Don convinced a live duck to model for him (no, we don't know how he did that). Featherstone named him Charlie then later set him free in Cogshall Park in Fitchburg, MA when the plastic duck was complete. Don told us the plastic duck was anatomically correct (and no, we didn't ask). Not having a live flamingo model, he used pictures and National Geographic Magazine to sculpt his now famous flamingos. It took about two weeks to model both halves of the bird, brought into the third dimension by then-revolutionary injection-mold technology. He named the first plastic flamingo Diego.

Mr. Featherstone was the winner of a 1996 Ig Noble Prize for Art. [Each year, in Cambridge, Massachusetts, the editors of the Annals of Improbable Research present their Ig Noble Awards, in a parody of the Nobel awards ceremony.] Ig Nobel Prizes are awarded for achievements that make people LAUGH, then THINK.] For example: after something has been discovered or created, no one - anyone, anywhere, ever - can later be the first to have made that discovery or creation.

Some time around 1990, normally sedentary plastic flamingos began to travel. Late at night, flocks of flamingos would land in someone's front yard for a birthday, holiday or anytime surprise. They migrated again the next evening, only to appear to another yard the next morning. Although the plastic flamingo was originally not a nocturnal migrating bird, maybe there is no deterring of destiny. That wonderful pink icon of tackiness is more popular now than ever before!

When the plastic flamingo turned 40, they even got a full page in National Geographic. Nat Geo held a photo contest, the results of which you'll have to see to believe. Check out the winners on our photo contest page.

These official flamingos were sold in pairs, with one standing upright and the other with its head low to the ground, "feeding". Each one of Featherstone's original flamingos bears his signature. You can even adopt a pair of the original birds directly from us. Adopt an American icon.
Order a flock of flamingos 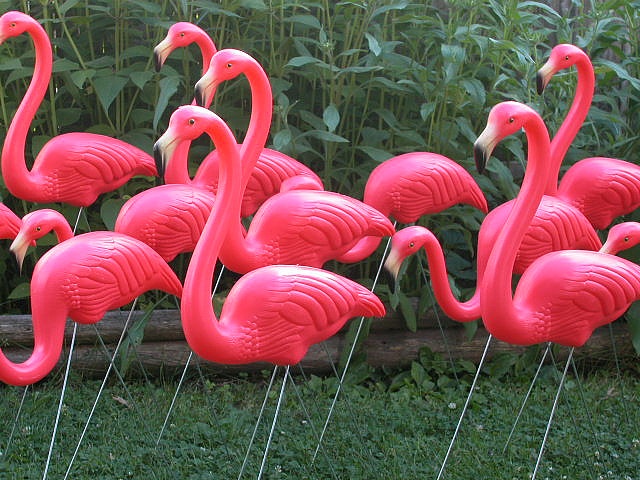